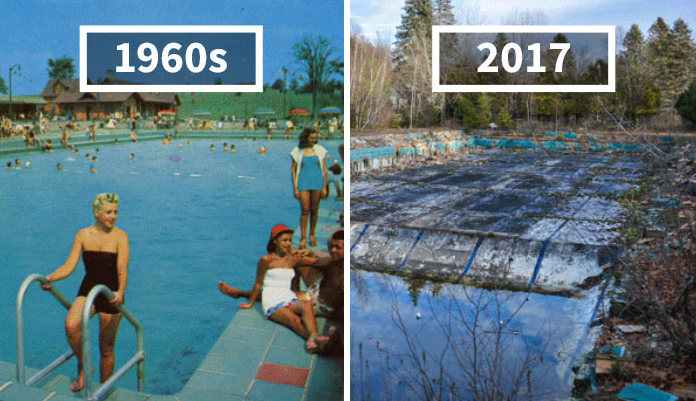 Not long ago an old matchbook laying on photographer Pablo Iglesias Maurer’s desk caught his eye. Or rather, it was the postcard-like picture on it, of a resort complex built in the 1960s. It got Pablo wondering how the place looked now, and the answer has led him to make an amazing photo series called Abandoned States.

The picture came with the title How to Run A Successful Golf Course, but when Maurer got to the place, it was clear the owner of Penn Hills Resort didn’t follow that advice. He pointed the camera at the decaying building at roughly the same spot and did a ‘5-decades-after’ shot of the place.

Ever since then, Pablo was hooked. He ordered more 60s postcards from eBay and started going around the country capturing these once beautiful buildings that now stand abandoned only as faint memories of what once was.

“The postcards, have their own haze—the places were never as nice as they look. I often struggle to get the two images to line up, as well. But time blurs the difference, and brings everything into focus.” (special thanks to Greta)

WARNING: The images are in GIF format so you might need to wait a bit for them to load.

More of the indoor pool at Grossinger’s. The tiled floor was heated, the entire structure air conditioned. Above, beautiful mid-century “sputnik” chandeliers cast a glow on the swimmers below. Below the pool are exercise rooms, a gym, salon and a host of other amenities. The pool has sat vacant since the late 90’s and has fallen beyond repair. (source)

Grossinger’s outdoor pool, olympic sized, built in 1949 at a cost of $400,000 (about $5 million in today’s market.) Long gone are the private cabanas, changing room and lounges that used to surround it. (source)
3:

The browns and reds and oranges of this Poconos dining hall’s carpet have turned green, the color of the moss that’s taken its place. (source)
4:

The Homowack Lodge now sits abandoned on the southern edge of the famed “Borscht Belt.” On its lower level, maybe the highlight of the place, a four-lane Brunswick bowling alley. It has seen better days. The resort closed in the mid-2000’s but lived on briefly, first as a Hasidic resort and lastly as the site of a summer camp—one which was forced to shut down after the NY Department of Environmental Conservation deemed it uninhabitable. (source)
PREV TOPICpage 1 of 5next